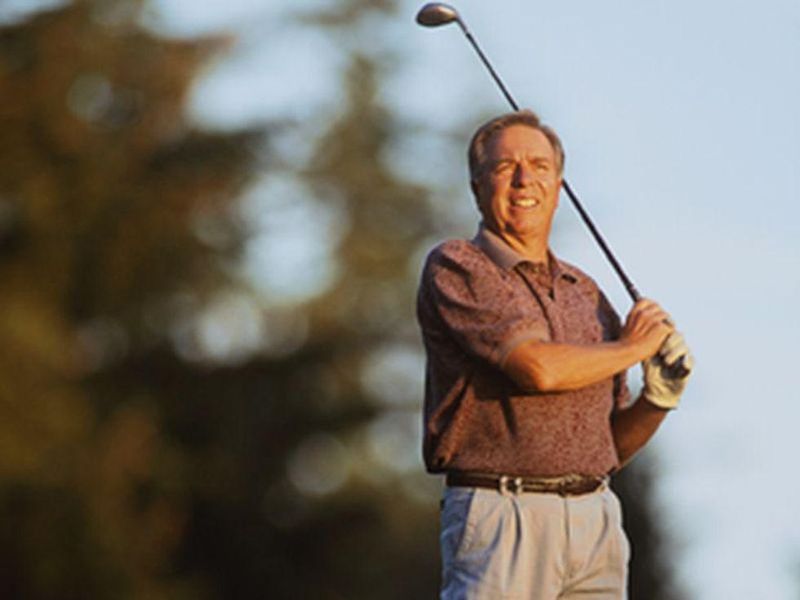 Golf after total knee replacement is apparently par for the course.

Researchers say most golfers can return to the links within five months of surgery and play as well -- or as poorly -- as they did before.

"A lot of patients come to the office wondering when they're going to be able to play or if they are going to ever be able to play, and if they can expect to be better or worse at the game after the total knee replacement," said study lead author Dr. Joseph Tramer, a resident in orthopedic surgery at Henry Ford Hospital in Detroit.

"Patients can reliably get back to golf, but it does take a few months," he added.

If taking a swing was limited by knee pain, a total knee replacement can help alleviate discomfort so players can take less pain medication, Tramer said. Most golfers can drive the ball as far as before surgery, and their handicaps do not significantly change, he added.

The key is rehabilitation after surgery. Tramer said patients have to keep the knee moving from the start to get best results.

"We actually get people out and walking on it the same day of the surgery, and we're not keeping patients in the hospital as much as we used to," he said.

Tramer noted that many patients leave the hospital the same day and they're encouraged to move the knee right away.

"There's really no limitation in terms of what you can do on it, but it is big surgery, so we kind of take it slow," he added.

Tramer and his colleagues compared two types of total knee replacement -- cruciate-retaining and posterior-stabilized implants. More than 1,900 patients completed a post-surgery survey, and responses from 54 golfers were analyzed.

The survey included questions about overall performance, pain and knee stability while golfing before and after surgery.

In all, nearly 82% of golfers were playing five months after surgery, and 84% said their golf game either improved or stayed the same. After surgery, golfers also had lower pain scores, little or no discomfort while playing and needed fewer anti-inflammatory drugs while on the links.

Tramer noted that patients' ability to get back to golf was the same regardless of which type of knee replacement they had. There was no significant difference in outcome based on sex, age or any other medical condition.

"We did notice that people who played less golf before surgery were at a higher risk of not returning after," Tramer said. "That could be for a variety of reasons -- maybe they're not as committed to playing the sport because they didn't play that many rounds beforehand or they were in worse shape before compared to some other people, so they might not be able to go back to an activity like golf."

The findings were recently published in the journal Sports Health.

Dr. Jeffrey Schildhorn, an orthopedic surgeon at Lenox Hill Hospital in New York City, said that most patients can get back to golf soon after a knee replacement.

"I tell my patients to go back to golf as soon as they're comfortable, which is usually between three and five months," he said. "People golf with total [knee replacements] all the time. Golf is a really good sport for knee replacement."

Schildhorn, who wasn't part of the new study, agreed that active rehabilitation is essential. It begins by working on range of motion and getting the knee back to bending and some twisting.

"The first six weeks in my practice is focused on some strengthening, but more importantly, just getting back to walking and range of motion. Once the range of motion has crossed a certain specific threshold, you can start moving on to more sports-specific activities," he said.

Schildhorn said he tailors rehab for each patient.

"If you have one person who's interested in just having pain relief so they can get to and from their refrigerator, that's a lot different from someone who's trying to play golf," he said.

The more patients work at rehab, the better the result, said Schildhorn.

"Anybody who doesn't rehab their knee properly, if they are lazy, if they sit around and just leave it bent because it was comfortable in that position, they're not going to get what they want," he added. "You've got to be dedicated to it."

For more on knee replacement, see the American Academy of Orthopedic Surgeons.