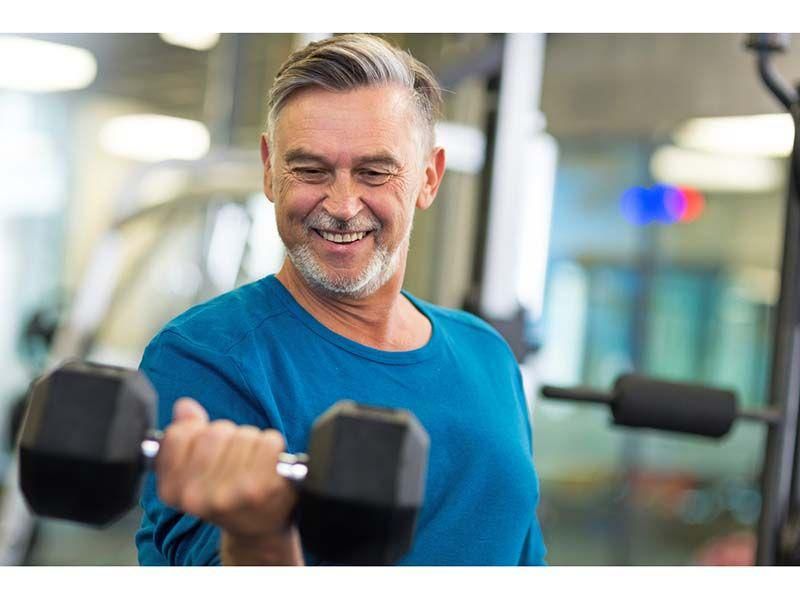 Exercise Helps You Sleep, But Which Workout Is Best?

Folks tussling with lousy sleep often turn to the sidewalk or the treadmill or the bike, figuring that aerobic exercise will earn them a few more minutes of solid snoozing.

They might be better off hefting some weights, a new study argues.

Resistance exercise appears to be better than aerobic workouts as a way to improve your 40 winks if you're having problems sleeping, researchers reported Thursday at an American Heart Association meeting in Chicago.

For study participants who had been unable to regularly get at least seven hours of sleep, weight training added an average 40 minutes of shuteye, said lead researcher Angelique Brellenthin, an assistant professor of kinesiology at Iowa State University.

"Basically, resistance exercise almost doubled the amount of additional sleep duration they got as a result of being part of this study," she said.

Between 30% and 50% of adults report having poor quality sleep, and more than a third regularly get less than seven hours, researchers said in background notes.

Poor sleep isn't just an annoyance -- it's a health hazard. Bad sleep increases your overall risk of death by 24%, and your risk of heart-related death by 42%, researchers said.

It's been known for some time that aerobic exercise can improve sleep, but few studies have looked at whether weight training could provide the same sort of benefits, Brellenthin said.

So she and her colleagues analyzed data from a study funded by the U.S. National Institutes of Health looking at the way exercise can improve health. As part of the study, participants were asked about their sleep.

The study included 386 people who were randomly assigned to one of four groups -- an aerobic exercise team, a resistance training team, a combined aerobic/resistance exercise squad, and a control group assigned no exercise.

Aerobics folks could sweat it out on a treadmill, a bicycle or an elliptical, while the weight training group was asked to complete a full circuit on 12 resistance machines that worked all the major muscle groups, researchers said.

All were asked to work out for an hour three times a week, for a full year. Researchers evaluated their health at six months and one year.

"The people who were already good sleepers at baseline, the entire study didn't really do much to further improve their sleep," she said.

But any exercise helped improve bad sleep, and resistance exercise most of all. The poor sleepers in the combined exercise group had their sleep improve by about 17 minutes.

"Maybe resistance exercise is a way to stimulate or reinvigorate those types of hormones that have been more broadly associated with better, deeper sleep," she said.

Another possibility involves a theory that sleep is a time the body takes to restore and repair itself, Brellenthin said. Vigorous weight training is meant to create lots of tiny muscle tears that, when repaired, lead to bigger and stronger muscles.

"When you work out on 12 different resistance exercise machines that stimulate all major muscles of the body, that's a pretty powerful body-wide stimulus that might be sending a strong signal to the brain -- hey, this person needs to undergo some major restorative processes tonight, let's make sure they sleep and sleep deeply," Brellenthin said.

The findings are "novel and intriguing," said Pamela Lutsey, an associate professor of epidemiology and community health at the University of Minnesota School of Public Health in Minneapolis.

Lutsey, who wasn't part of the study, said more research would be needed to find out if one or the other is better in terms of improving sleep quality.

Findings presented at medical meetings are considered preliminary until published in a peer-reviewed journal.

Johns Hopkins has more about exercising for better sleep.