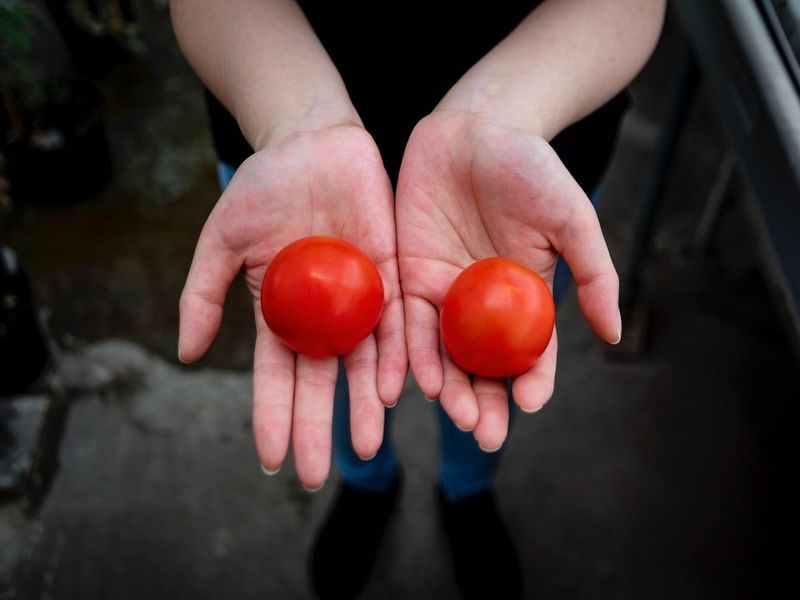 Your Daily Vitamin D From Tomatoes? Gene Tweak Could Make It Happen

A genetically engineered tomato could one day rival salmon as a dietary source of vitamin D, if early research pans out.

British scientists used gene "editing" to produce the tomato, which is chock full of provitamin D3, a precursor that the body can convert into vitamin D.

The gene tweak targeted an enzyme in tomatoes that normally converts provitamin D3 to cholesterol. With the gene edit, that process was disrupted, resulting in a tomato fruit rich in the precursor.

The researchers said the tomato could potentially provide a similar amount of vitamin D as 28 grams of tuna or two eggs.

"We have produced a plant-based source of vitamin D3 suitable for vegans and vegetarians," said senior researcher Cathie Martin. She is a professor at the John Innes Center, a plant science research center in Norwich, England.

That's important, she said, because few foods naturally contain vitamin D, and they are all animal products - fatty fish (like tuna and salmon) and egg yolks among them.

In the United States, vitamin D is also added to certain foods, like cow's milk and many non-dairy milks and breakfast cereals.

Because of that, vitamin D insufficiency, and overt deficiency, are less common in the United States than many other places. That includes Europe, which has been "more averse" to adding vitamin D to foods, Martin noted.

In fact, an estimated one billion people worldwide have insufficient vitamin D levels, according to the researchers.

And despite food fortification, about one-quarter of Americans still have inadequate vitamin D levels, the study authors noted. Certain groups, including the elderly and people with darker skin, are at increased risk: The body naturally synthesizes vitamin D when the skin is exposed to sunlight, but that process is less efficient in older people and those with darker skin.

In sum, Martin said, having more vitamin D-packed foods would be a good thing.

For the new work, described online May 23 in Nature Plants, Martin's team turned to CRISPR technology. The tool allows researchers to precisely "snip" bits of DNA in a gene, to alter its function.

Here, the researchers made a small edit to a tomato gene that regulates an enzyme - 7-dehydrocholesterol reductase - that converts provitamin D3 into cholesterol.

For people skeptical of "frankenfoods," Martin stressed that with gene editing, no foreign DNA is introduced into the plant. And the researchers found no unintended effects of the edit on other tomato genes.

"I don't have any problem with taking a pill," Martin said. "But it's so much better to eat a plant food."

"To me, anything we can do to improve the nutritional content of our food is a positive," said Amanda Palmer, an assistant professor of international health at Johns Hopkins School of Public Health, in Baltimore.

Palmer, who was not involved in the research, studies "biofortification" - including the use of genetically modified rice to provide vitamin A and address the problem of vitamin A deficiency in low-income countries.

She called the new study "exciting," but also an early proof-of-concept. Many questions remain, Palmer said: How stable is the provitamin D3 during storage and processing? How well is it absorbed by the body? And would it actually change consumers' vitamin D status?

Palmer noted that biofortification is typically done with staple crops that are part of a culture's daily diet, like rice and corn.

Whether tomatoes could be consumed to a degree to have a "public health impact" is unclear, Palmer said.

The researchers believe their gene-edited tomato offers another potential perk: Provitamin D3 levels were particularly high in the tomato plant leaves - which would normally be discarded. Instead, Martin said, growers could extract the vitamin from the greens for use in supplements.

That would not only provide a vegan-friendly source of supplemental vitamin D, she said, but could also give growers a financial incentive to produce the tomato.

"They could make money from the waste materials," Martin said. In theory, this means the tomatoes themselves could be priced like conventional ones.

The researchers already have an answer to another crucial question about the gene-edited tomatoes. "Yes," Martin said, "they taste like tomatoes."

The U.S. National Institutes of Health has more on vitamin D.