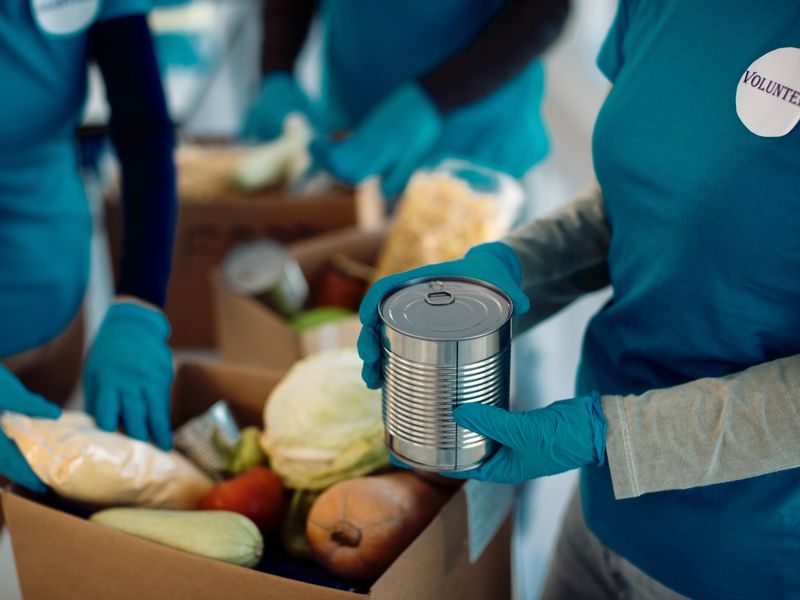 Food Banks Save Needy Families Up to $1,000 Per Year

Millions of Americans will enjoy a hot, nutritious Thanksgiving meal thanks to their local food pantry, often staffed by volunteers. Now, new research spotlights just how important these charities are.

Families who rely on pantries for food assistance come away with $600 to $1,000 in free meals and produce every year, after taking into account time, transportation and other costs associated with using them, researchers say.

Nationwide, that adds up to big numbers, a new study shows, with pantries collectively providing Americans between $19 billion and $28 billion in free food every year.

“The most recent Household Food Security in the United States report … estimates that 5.6% of U.S. households use food pantries, which are the main distribution vehicle for food banks,” said study author Anne Byrne, a Washington, D.C.-based research agricultural economist for the U.S. Department of Agriculture.

“We know people receive the food for a retail cost of $0,” Byrne noted. “But by using travel costs — (such as) time, gas, etc. — we were able to estimate what people give up in order to get food from pantries.”

On average, their research revealed, every time someone visits a pantry, he or she nets $40 to $60 in food provisions.

Byrne said that appears to be the first estimate “of what these services are worth to people as measured by trade-offs they face.”

It also shows how food pantries fit a bigger picture.

"In this broader context, our results suggest that food bank services collectively represent a sizeable share of the food landscape," the authors wrote.

Byrne and Just arrived at their estimates after analyzing data collected between 2005 and 2017 at the Food Bank for Larimer County.

The organization is a network of food distribution centers in northern Colorado that serves a community of about 363,000 people. In 2017 alone, participating centers gave away more than 9 million pounds of food.

To receive help, residents must meet income guidelines. A single person can earn no more than $2,147 per month, and a five-member household, $5,173.

Those who qualify can get help twice per week, taking away bags packed with meat, dairy, perishables and canned goods.

The data included information on shoppers who had visited a food distribution center at least once during the study timeframe.

Most were women. And while some households were one-time visitors, others were regulars over many years, Byrne noted.

All told, she said, they represented a “range of incomes, which demonstrates that there is a diversity of users and demand for these services.”

The researchers reviewed data on how far each shopper lived from their two nearest pantries and how much they had to spend to get there, including car expenses and the equivalent wage value of their time.

On average, those seeking assistance lived 4-1/4 miles from their closest pantry and 17 miles from the next-closest. They averaged about 15 visits a year.

As to whether the specific value attached to services offered by Larimer Network is representative of pantry values in other communities, Byrne and Just acknowledged the many differences in food pantry use patterns across the country. Transport costs vary in urban versus rural areas, they noted, as do the racial and ethnic backgrounds of those in need. Larimer County has a larger population of white people than the nation as a whole.

The study authors said it is likely that the net value of food provided by pantries across the United States may vary considerably.

Still, the pantries clearly offer “substantial benefits” to Americans in need of help, the team said.

“Food banks are an important part of America's safety net,” May noted. "Without food banks, millions of people across America would absolutely struggle to access the nutritious food they need for themselves and their families.”

May also expressed little surprise that Americans in need can expect a good value when reaching out to food pantries for assistance — especially during a time of high inflation when the demand for food remains higher than before the COVID-19 pandemic.

The findings were recently published in the American Journal of Agricultural Economics.

There's more about food pantries and hunger at Feeding America.