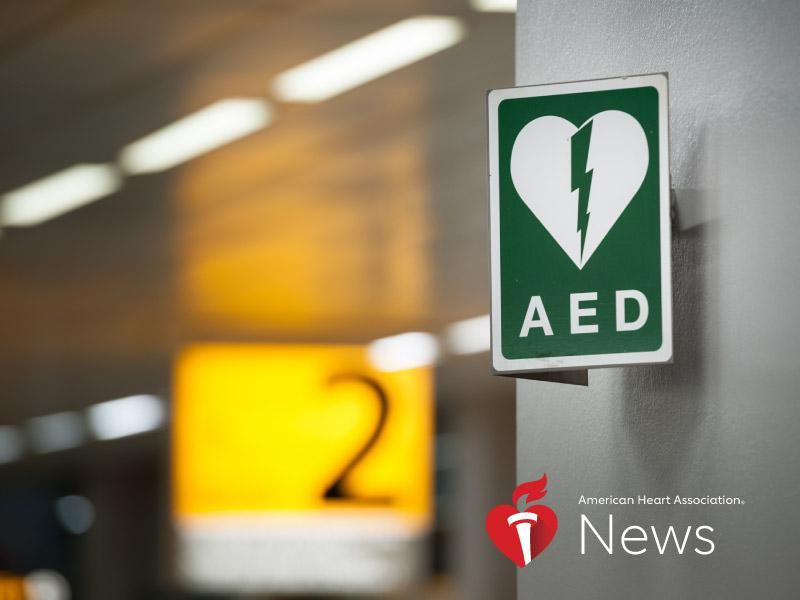 AHA News: Thanks to CPR and AEDs, Air Travelers Have Higher-Than-Average Survival Rates From Cardiac Arrest

It is estimated that thousands of air travelers around the world have a cardiac arrest each year, with nearly a quarter of those occurring on a plane, according to new research that points to the success of CPR and AEDs in keeping survival rates higher than the national average.

The new study, published Tuesday in the Journal of the American Heart Association, comes at the end of a summer when travelers began returning en masse to airports and planes after pandemic lockdowns.

Because cardiac arrests are relatively rare on commercial flights, few studies have looked at their frequency, the use of lifesaving interventions, and the outcomes. Researchers for the new study set out to gauge the impact of a 2004 Federal Aviation Administration requirement that all U.S. commercial airlines be equipped with automated external defibrillators, or AEDs.

They looked at Seattle-Tacoma International Airport records of every adult treated by emergency medical service workers for cardiac arrest, which is when the heart suddenly stops beating because of an electrical malfunction. A heart attack can trigger cardiac arrest, but so can other heart and non-heart issues.

That's still higher than the national average survival rate of less than 11% for out-of-hospital cardiac arrest, which points to the importance of CPR and AEDs, said the study's lead author Dr. Neal Chatterjee. He noted, for example, that all survivors of on-plane cardiac arrests were treated with an AED.

"Our study found that even though a cardiac arrest is rare, it's certainly survivable if we can deliver early interventions. Flight attendants and airport staff should be trained to intervene, but there are also things we can do as bystanders on the plane or off-plane to improve outcomes."

Bystanders who see someone collapse or become unresponsive should immediately alert a flight attendant or an airport employee, Chatterjee said. If you're in an airport and are comfortable performing CPR until help arrives, it's OK to do so. But if you're on a plane, you should quickly alert the flight crew and follow their cues.

"It's incredibly important for there to be a calm, organized environment where there's a person in charge. Trust the flight crew to make those decisions, and wait to volunteer if they ask for assistance in resuscitation efforts," said Chatterjee, a cardiologist and cardiac electrophysiologist at the University of Washington Medical Center in Seattle.

Around the world, about 5 billion people fly commercially each year. When researchers applied the results of their study to those figures, they estimated 2,000 travel-associated cardiac arrests happen globally each year, with 350 in the U.S.

"I think the study offers a powerful message for the importance of bystander CPR training, and also for having the airline industry work with federal agencies to optimize training around cardiac arrest care and specifically application of AEDs," said Chatterjee, who also is an assistant professor of medicine at the University of Washington.

Dr. Benjamin Abella, director of the University of Pennsylvania's Center for Resuscitation Science in Philadelphia and a professor of emergency medicine, said the study was limited by its small sample size.

Still, Abella, who was not involved in the research, applauded the authors for showing that higher-than-average survival rates can be achieved when cardiac arrest is witnessed on a plane or in an airport and CPR and AEDs are used promptly.

"The study is both reassuring to air travel passengers," he said, "and a challenge to all of us to dramatically improve survival rates in other settings."

He said he'd also like to see studies done on passenger train travel, "which is a completely unstudied area with a much broader population."