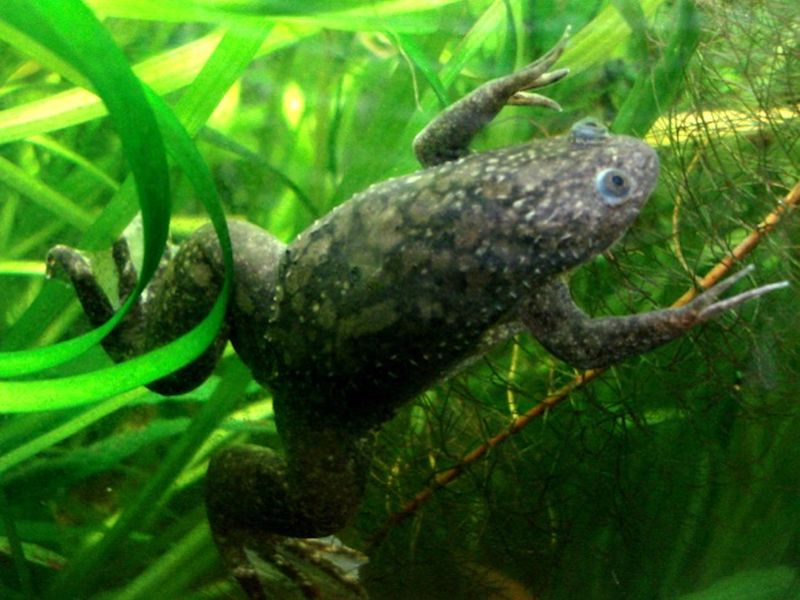 It sounds like the stuff sci-fi films are made of, but the successful regrowth of lost limbs in frogs could point the way to helping human amputees, researchers say.

Some creatures -- including salamanders, starfish, crabs and lizards -- can fully regenerate at least some lost limbs. But like humans, adult frogs don't have that ability.

However, a team of scientists regrew lost legs in adult African clawed frogs through the use of a five-drug cocktail. The cocktail was in a wearable silicone cap that was placed over the stump for 24 hours.

That brief use of what the researchers call a BioDome triggered an 18-month period of regrowth that restored an almost functional leg, according to the study.

“It’s exciting to see that the drugs we selected were helping to create an almost complete limb,” said study co-author Nirosha Murugan, a research affiliate in the Tufts University Allen Discovery Center in Boston.

“The fact that it required only a brief exposure to the drugs to set in motion a months-long regeneration process suggests that frogs and perhaps other animals may have dormant regenerative capabilities that can be triggered into action," Murugan added in a school news release.

The results were published Jan. 26 in the journal Science Advances.

The regrown limbs moved and responded to stimuli such as a touch, and the frogs were able to make use of the limbs for swimming, moving much like a normal frog.

Each of the five drugs had a different purpose, including reducing inflammation, inhibiting the production of collagen which would lead to scarring, and encouraging the new growth of nerve fibers, blood vessels and muscle, the researchers explained.

“Mammals and other regenerating animals will usually have their injuries exposed to air or making contact with the ground, and they can take days to weeks to close up with scar tissue,” said study co-author David Kaplan, a professor of engineering at Tufts.

“Using the BioDome cap in the first 24 hours helps mimic an amniotic-like environment which, along with the right drugs, allows the rebuilding process to proceed without the interference of scar tissue," Kaplan explained.

The next step is to assess how this treatment applies to mammals, the researchers said, as animal research doesn't always pan out in humans.

There's more on limb loss at the U.S. National Library of Medicine.