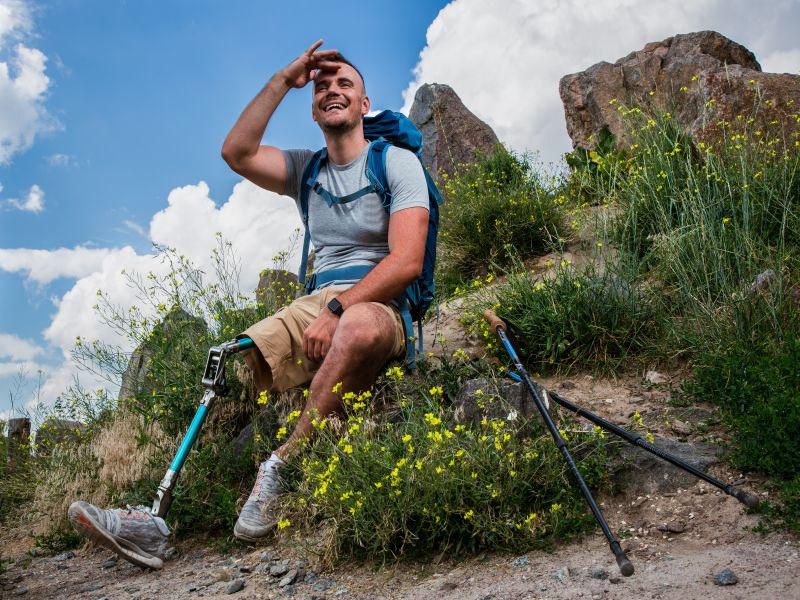 For Amputees, a New Kind of Surgery May Allow Better Control, Sensation

A new type of surgery offers amputees better control of muscles that remain after surgery, and of their prosthetic limbs, its inventors say.

The standard surgical approach to amputation has changed little since the American Civil War, according to developers of the new approach. In their small study, the new procedure also helped curb pain and sensations like the troubling "phantom limb" syndrome.

"In working with all these patients, that's actually been one of the most rewarding parts of my experience. They have been very receptive and very open to trying this," said Shriya Srinivasan. She is a postdoctoral researcher at Massachusetts Institute of Technology, in Cambridge, Mass., and lead author of the study.

"They recognize that there's a little bit of risk that comes with being the first people to have this new type of procedure," Srinivasan said. "By and large, they really loved the results. I think they're finding themselves to feel a lot more mobile and functional after the surgery."

In this new type of surgery -- called agonist-antagonist myoneural interface, or AMI -- surgeons reconnect those muscle pairs so they retain the push-pull relationship they've always had and improve sensory feedback.

For the study, the researchers compared 15 patients who had the new procedure to seven who had traditional amputation surgery.

The investigators measured precision of movements of the ankle and subtalar joint, which allows the foot to tilt inward or outward.

Patients were asked to lie down with their legs propped on a foam pillow, without prosthetic limbs. They were asked to flex both their intact limbs and the limbs that had been amputated at 25%, 50%, 75% and 100%.

The researchers compared electrical signals from muscles and found they were similar in both limbs for AMI patients. These patients could control their muscles more precisely.

Patients who had traditional amputations were more likely to repeat the same movement, even when asked to flex at different levels.

In another recent paper, the team reported that brain scans of the AMI patients showed more sensory feedback from residual muscles.

Conventional amputation can make it harder for a person to know where their limb is in space because of the loss of the sensory feedback. When one muscle contracts, the other doesn't have its opposite activity, Srinivasan said, and the brain gets confusing signals.

"Conventionally, these fields have been somewhat isolated, resulting in a great progression of technology in the robotics and prosthetics field, but relatively little connection to the way they're interfaced with the human body," Srinivasan said. "Uniting those two disciplines and having the border be more seamless did seem like a logical way to proceed about this."

The team also developed a modified version of the surgery for people who have already had a traditional amputation. Called regenerative AMI, it involves grafting small muscle segments to serve as the push-pull muscles for the amputated joint.

The surgeries were done by Dr. Matthew Carty, a plastic surgeon at Brigham and Women's Hospital in Boston.

The findings were published recently in the journal Proceedings of the National Academy of Sciences.

Dr. Richard O'Donnell, an orthopedic surgeon at the University of California, San Francisco, reviewed the study.

"I really do think the paper is a landmark advance with great potential to improve life and rehabilitation of patients with not only below knee amputation, but also above knee amputation and upper extremity amputation," O'Donnell said.

He noted that patients are reporting less pain, both compared to before their operation and to the group that had traditional amputation surgery.

A person can experience three types of pain after amputation: pain in the remaining limb; burning or electrical pain in the part of the limb that's no longer there; and a sensation that the missing limb is still there. Some of that relates to reorganization in the central nervous system after the limb loss, O'Donnell said.

"With re-establishing not exactly normal -- but approaching normal -- connection between agonist and antagonist muscles, the patients seem to experience less discomfort," he said.

"You're getting some glimpse of that in the article," O'Donnell said, noting that electrodes on the skin picked up muscle signals. "And then the goal is to try to translate those muscle signals into control of the robotic external prosthesis."

That's the next phase, he said, and researchers are already starting to get results on that.

"That is going to take a while," O'Donnell said. "The results in terms of pain and function of the limb in real time are a definite benefit for patients with amputation right now, today."