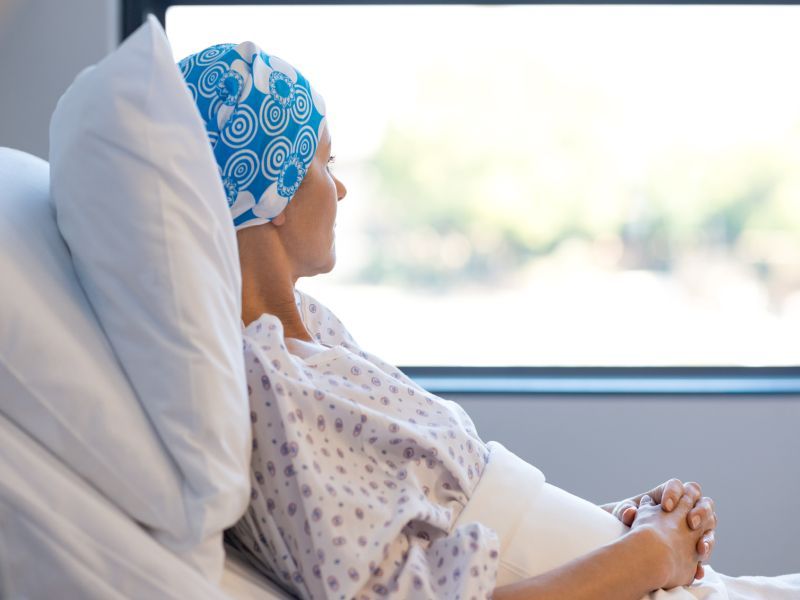 Drug Combo May Fight a Tough Form of Breast Cancer

The study involved women with "triple-negative" breast cancer, which accounts for about 15% to 20% of breast cancers among U.S. women. It is so called because the cancers lack receptors for the hormones estrogen and progesterone, and for the protein HER-2.

Traditionally, surgery and chemotherapy have been the mainstays of treatment for triple-negative breast cancer. Unfortunately, the disease often resists, or becomes resistant to, chemotherapy -- and that was the case for women in the new study.

So the researchers tried a new approach. They added an experimental agent, dubbed L-NMMA, to the standard chemotherapy drug docetaxel. Twenty-four patients received up to six three-week cycles of the combo.

By the end of treatment, 11 patients had responded, showing a regression in their cancer. For two women, there were no more signs of cancer in the breast.

The study group included both women with metastatic cancer, which means it had spread to distant sites in the body, and those with locally advanced cancer. Those are advanced tumors that have not yet spread throughout the body.

Women with locally advanced cancer responded better to the experimental treatment combo: nine out of 11 had at least a partial response. That was true for two of 13 women with metastatic cancer, according to the report.

The researchers also want to test the approach against metaplastic breast cancer, a rare form of the disease that is often triple-negative.

In lab research, her team has found that L-NMMA can curb tumor growth and spread.


However, experts who reviewed the new study said much more research is needed to know how L-NMMA might fit into triple-negative breast cancer treatment.

"I applaud the idea," said Dr. Julie Gralow, chief medical officer of the American Society of Clinical Oncology. Essentially, she noted, the approach is about improving patients' responses to chemotherapy.

Larger studies are required to further test the treatment's efficacy and safety, said Gralow, who was not involved in the research.

She also emphasized the recent strides that have been made against triple-negative breast cancer. While chemo was once the only option, several new treatments have been approved or are currently under study.

Earlier this year, the U.S. Food and Drug Administration approved the immunotherapy Keytruda (pembrolizumab) for women with early-stage triple-negative cancer, as well as some women whose cancer has spread to other sites in the body. The drug frees a "brake" on the immune system, allowing it to find and attack cancer cells.

For women with early-stage triple-negative cancer, Keytruda is used along with chemo before surgery, and then on its own afterward. And that, Gralow said, is now the standard of therapy.

Meanwhile, Gralow said, research has shown that some triple-negative cancers do have receptors for androgens ("male" hormones like testosterone). And studies are now testing anti-androgen drugs in those patients.

"We've traditionally defined triple-negative disease by what it isn't," Gralow noted. "We're learning more about what it is."

He said the treatment of women with advanced triple-negative cancer has gone from "dismal," when chemo was the sole weapon, to more encouraging, with the newer options.

Blocking nitric oxide signaling in the disease is a "novel therapeutic approach," Shapiro said, and should be studied further.

According to Chang, one question for the future is whether L-NMMA can also boost the response to immunotherapy.