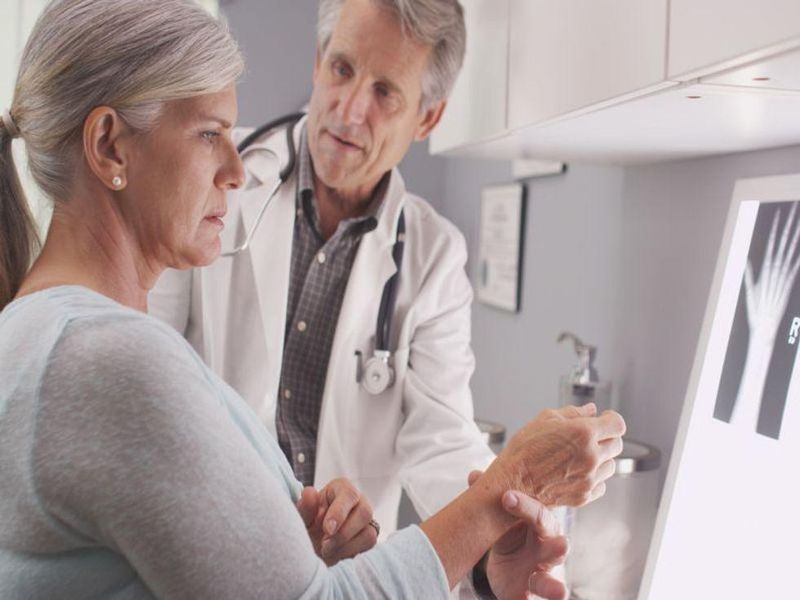 How Safe Is a 'Holiday' From Bone-Strengthening Meds?

People on bone-protecting drugs often take breaks from them for a few years. Now a new study finds that a "holiday" from the medication risedronate (Actonel) may come with a slightly increased risk of hip fracture.

Researchers found that compared with a drug holiday from alendronate (Fosamax), taking a few years off from risedronate came with an 18% higher risk of hip fracture.

The absolute difference was small: 3.6% of patients on holiday from risedronate suffered a broken hip, versus 3% of those taking time off from alendronate.

But experts said the findings do suggest that people on a risedronate holiday should be reassessed and possibly restart the medication sooner than those who had been on alendronate.

Both risedronate and alendronate belong to a medication class called bisphosphonates. They are widely prescribed to people with the bone-thinning disease osteoporosis, to reduce the risk of fractures.

After years of use, though, the medications can have rare, but serious side effects -- namely, fractures of the thigh bone or a breakdown of bone in the jaw.

So doctors often recommend a holiday from bisphosphonates, with a reevaluation after two to three years.

That hiatus is considered safe for patients at relatively lower risk of fractures because bisphosphonates "bind" to bone, and continue to have protective effects after they are stopped.

However, risedronate and alendronate do have differences: Risedronate has a weaker "binding affinity" to bone, explained Kaleen Hayes, the lead researcher on the study and an assistant professor at Brown University School of Public Health.

The question, she said, has been whether risedronate's protection against fracture wanes a bit quicker during a medication holiday.

The new findings -- published Jan. 11 in the Annals of Internal Medicine -- suggest it does.

For the study, Hayes and colleagues used a health care database covering Ontario residents age 65 and up. They focused on more than 50,000 people who had used either risedronate or alendronate for at least three years before taking a holiday.

Roughly 25,000 risedronate users were each compared against an alendronate user with similar characteristics.

Overall, patients on holiday from risedronate had an 18% higher risk of hip fracture, though the difference was not apparent right away. It emerged two years into the medication hiatus, Hayes said.

Current recommendations say patients who have been taking bisphosphonates for three to five years can consider a holiday, with a "reassessment" after two to three years.

That involves looking at factors such as whether a patient has developed a health condition or started a medication that can reduce bone density, explained Dr. Linda Russell, who directs the Osteoporosis and Metabolic Bone Health Center at the Hospital for Special Surgery in New York City.

Russell, who reviewed the findings, said they are not surprising, given differences in how the two medications "stick" to bone. But they imply that risedronate users may need to restart treatment a little sooner than those on holiday from alendronate, she said.

"This is an important piece of work that adds a useful piece to the puzzle," said Dr. Kenneth Lyles, president of the board of trustees for the nonprofit Bone Health and Osteoporosis Foundation in Arlington, Va.

He said patients on holiday from risedronate should talk to their doctor about how to reassess, which might include doing a bone density measurement as early as one year into the hiatus.

Follow-up is key for all patients, however. Bisphosphonates are "very good" drugs, Lyles noted, but they do not cure osteoporosis.

"Osteoporosis does not go away," he said. "We can only reduce the risk of fracture."

The current findings do not imply that alendronate is the "better" bisphosphonate or should be the preferred choice, all three experts said.

Risedronate may be less likely to cause heartburn, Russell said. And unlike alendronate, Hayes noted, it comes in a once-a-month formulation and a weekly delayed-release version that does not have to be taken on an empty stomach.

Russell also emphasized that medication is part of the story. People with balance problems, she noted, may want to talk to their provider about exercises or physical therapy that can help with those issues.

"These medications do not completely prevent fractures," Russell said. "They lower the risk."

The Bone Health and Osteoporosis Foundation has advice on preventing fractures.