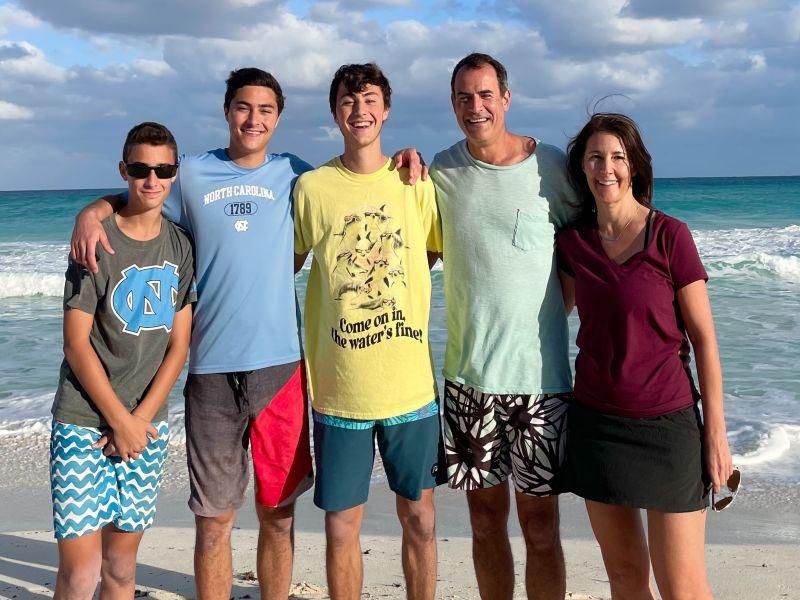 Like many proud moms, Lisa Stockman-Mauriello of Summit, N.J., is looking forward to exciting milestones in lives of her three sons over the coming months: One will graduate college, one will enter college, and the third will begin high school.

But unlike other moms, it's not guaranteed that she'll be there to experience them.

Lisa, 51, has amyotrophic lateral sclerosis (ALS), a disease marked by progressive loss of muscle control that is inevitably fatal. She also has a particularly ruthless and fast-progressing form of the disease, one that affects only about 1% of the estimated 15,000 Americans with ALS.

In fact, her doctor, Dr. Neil Shneider, told her that he has never seen an ALS case progress as rapidly as hers. Shneider, who directs the Eleanor and Lou Gehrig ALS Center at Columbia University in New York City, said most people with ALS die within three to five years of their diagnosis, but Lisa may only have months, or even weeks, left.

Her first symptoms appeared last summer when she was suddenly unable to raise her voice high enough to call out to her dogs in the backyard. Then she had trouble elevating her arm to blow-dry her hair. Her early morning workouts became incredibly arduous, and she found herself quickly out of breath.

After months of tests and some misdiagnoses, Lisa found out she had ALS in January. In February, genetic test results revealed that her disease was caused by a mutation in a particular gene, called the SOD1 gene.

Shneider was already involved in a late-stage clinical trial testing a drug called tofersen, which is designed to treat ALS cases specifically caused by the SOD1 mutation. The data from the drug's earlier trials appeared promising, and Shneider believed the drug was Lisa's best chance.

She certainly seemed to fit the criteria for the trial: Her condition is imminently life-threatening, no drug on the market could do much to help her, and tofersen seemed to be a safe and potentially beneficial option based on the limited data available. Since the trial was fully enrolled and already underway, Shneider asked Biogen, the drug maker, to grant Lisa early access to tofersen.

But that ended in Lisa receiving numerous rejection letters from Biogen officials. 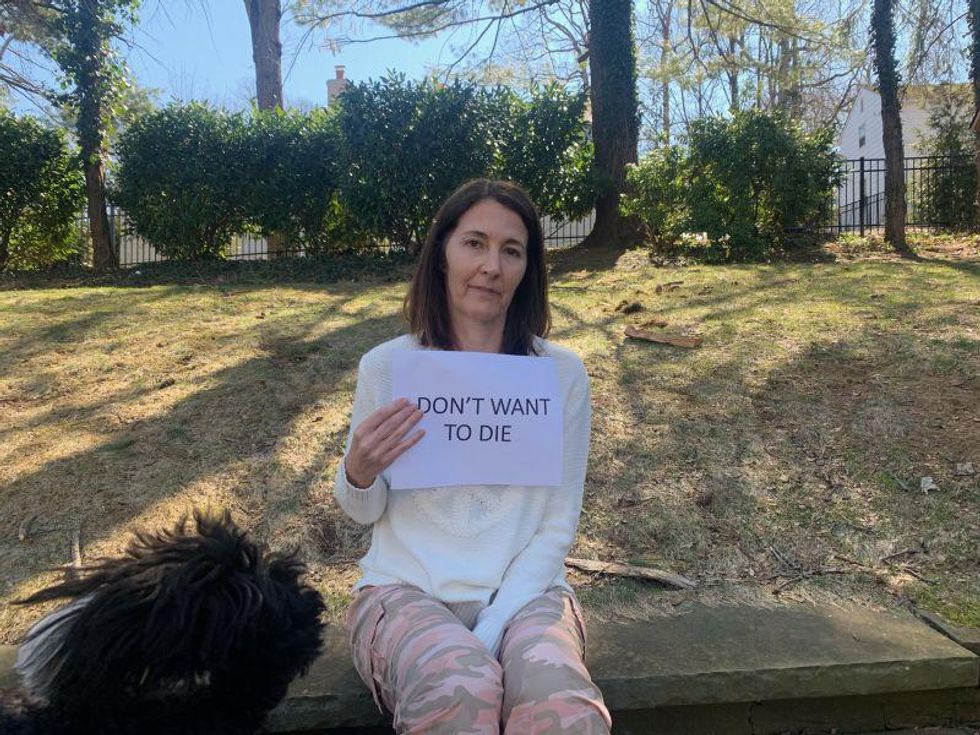 "Initially, we thought it was a no-brainer that Lisa's doctor, Dr. Shneider, would just make the request since he has a relationship with Biogen and he's an investigator for the tofersen trial," her husband Bob, also 51, said. "It sounded like it wasn't going to be an issue from the start."

Biogen's intransigence has spurred a massive effort on the part of "Team Lisa" -- a coalition of friends, family and distant connections that launched an impressive grassroots campaign to convince Biogen to change its mind.

While their efforts have not yet forced a change in her case, they have certainly made some noise.

Their Change.org petition now has over 100,000 signatures. Here's the Team Lisa petition.

Hundreds, if not thousands, of emails and letters have been sent to Biogen on Lisa's behalf, according to Bob. In March, Team Lisa staged a rally outside Biogen's headquarters in Cambridge, Mass. Lisa's supporters have contacted every single member of Biogen's board of directors and have even reached out to the leaseholders of some of Biogen's various properties. Bob has participated in an estimated 20 to 25 interviews with the media.

But her illness has not stopped. While friends and family kept up the fight, Lisa has also lost functionality at a breakneck pace. Since the campaign started, she is no longer able to speak or walk, her left arm is now completely useless and her right arm is nearly as bad.

After facing mounting pressure from Team Lisa and other ALS advocacy groups, Biogen finally announced Monday that it would allow people outside the trial to use the drug once the placebo portion of the trial is complete in July. But Lisa does not have the luxury of time.

"For us, this is a death sentence because we likely will not make it to mid-July when the tofersen Expanded Access trial will start, and if we do, we will be in such bad shape that we may not see any benefit," the family said in a statement released Tuesday.

Through letters to Lisa and a statement issued by the public affairs department, Biogen has previously stated two main reasons for the rejection: First, that providing Lisa access to tofersen would be unfair to the trial participants who are taking a placebo rather than the drug, and second, that it could jeopardize the clinical trial, delaying the potential approval of the drug in the future.

The U.S. Food and Drug Administration responded to a request for comment by reiterating the requirements needed to authorize an expanded access case.

Bob has spoken to dozens of ALS specialists, including Lisa's doctor, who said that the potential benefit of the drug justifies the potential risks, thus meeting the second requirement.

"The safety has been really strong, and she understands that there's a risk for any drugs," Bob said. "Frankly, even if the safety profile was riskier, there's a lot more upside than downside. Why wouldn't she take advantage of any possible treatment out there?"

Dr. Merit Cudkowicz, chief of neurology at Massachusetts General Hospital in Boston, said, "I think that if it's good enough for a trial, with the right consent and information, I don't see why I wouldn't provide expanded access with the same safety follow-up and the same information that I don't know if it works or not."

Biogen's denial seems to rest primarily on the third stipulation, which says, in part, that "providing the investigational drug for the requested use will not interfere with the initiation, conduct, or completion of clinical investigations…."

'So many people that care'

However, in a statement from 2019, former FDA Commissioner Dr. Scott Gottlieb said, "It's very rare that [expanded access] impacts a clinical development program in a negative way. In addition, while perhaps not commonplace, [expanded access] may add to the evidence for approval."

Before she got sick, Lisa had a 25-year-long career in public relations and advertising for Syneos Health, which advises drug developers like Biogen on bringing medical products through clinical trials and getting them to patients.

"She's advocated for pharmaceutical companies and has been a patient advocate in numerous ways," Bob said. "She understands how it all works." A few months ago, Lisa and Bob were participants in Pfizer's COVID-19 vaccine trials, and Lisa received the placebo while Bob got the real thing.

Bob said he and Lisa are thankful for all of the work that pharmaceutical companies like Biogen do. However, it doesn't seem to make sense to them why expanded access laws exist, if not to help someone like Lisa. "There almost couldn't be a clearer example of something that fits the bill," Bob said.

Lisa, Bob and their team of supporters have many rebuttals to Biogen's argument, but their central point is that they would never put Lisa's life above others.

"Lisa and I, and everyone working with us to support this effort would not be pushing this if we thought it would delay access," Bob said. "What kind of people would push for their loved one if it was going to hurt hundreds or thousands of people? If that were the real situation, Lisa would say, 'God, take me, I'm at peace with that.'"

Regardless of what happens next, Bob and Lisa are proud of the campaign they have mounted, hoping that it will lead to some good.

"Some of what is bringing us some peace of mind is that maybe this happened to Lisa because she has so many people that care about her and so many people who have the skillset to get the word out and talk to people who can raise awareness," Bob said. "Maybe we get the laws changed or tweaked, or maybe ALS gets a little better funding. Maybe the next time someone sees someone sick, they're a little more compassionate."

The U.S. National Institutes of Health has more about ALS.